I’m 45 years old and I downloaded a Justin Bieber song.

Sure it was a while ago, but the lyrics came to mind this week.

This last weekend Brian and I went camping up in the mountains. I carried Savannah on my back in a cool little pack and Brian carried all the rest of our gear – tent, sleeping bags, diapers, food and a million other “just in case” essentials.

And yet I was the one to get all the compliments from the other hikers.

Brian carried twice the weight and received half the glory.

I married a good man.

So we got to the campsite, six miles up a long and winding trail. By the time we arrived, I was drenched from head to toe in sweat and my shoulders were aching. I was thrilled to see the cabin where we could check in and Savannah was thrilled to see all the other hikers. She doesn’t know a lot of words yet, but it doesn’t seem to matter. She’ll hold a conversation with just about anyone as long as they nod at her animated noises.

Would she hold up?

I wasn’t sure what a dark night and the cold mountain air might bring. I could picture us trying to rock her as she wailed at the injustice of it all. Where is my crib? What have you done? Why is there a bear nibbling on my ear?

We laid out our sleeping bags and snuggled her in between us. She pulled her blankie up to her nose and looked around. 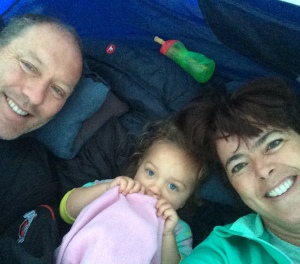 Her eyelids did the sleepy shuffle and Brian and I exchanged smiling glances above her head. This just might work!

The sky darkened and Brian and I whispered a sweet conversation until our own bodies settled in.

At home Savannah usually wakes at 4 a.m. I’ll sneak in, give her a pacifier and off she’ll go to dreamland again. On this trip she woke up several more times than usual. Maybe it was the dark, the noise of the fellow campers, the colder night air.

I thought she might get undone, but instead, she woke up and reached out her hand. She touched my chest, “Mama.” She reached over to Brian, “Papa.”

And went back to sleep.

Four or five times through the night, “Mama,” “Papa.” Back to sleep.

She didn’t care if it was cold. Dark. Different. As long as we were there, she was fine.

I had a tougher week this week. My heart was hurt. I was tempted to pout, wail, ball up my fists. But then I remembered Savannah and her nighttime touches, and instead I imagined myself curling into my God’s arms, tapping his chest, “Papa.”

He’s there. I’m safe. And as long as he loves me, I can face anything.

Of course the week didn’t bring anything near as dramatic as all that, but the song came to mind. And yes, that’s why I downloaded a Justin Bieber song at 45 years old. It makes me think of my God and it reminds me of what’s important, no matter what this life brings.

He loves me. And I desperately need that.

But don’t expect me to dance. Or flip my hair as I gyrate my hips.

I have my limits.

5 thoughts on “Savannah, Justin Bieber and a Dark Night”