It was right around 1 a.m. when I woke up to an announcement on the outside speakers. Muffled through our balcony door, all I could hear was “….. port side ….. port side.”

I was curious, but half asleep. I almost ignored it, but since we were on the port side I decided to have a look. I first checked our peephole to the cruise hallway. Nothing. Then to our balcony door. First thing I noticed was the cruise ship had stopped moving. Next I could see a spotlight pointed toward a bobbing light in the ocean. My neighbors were out on their balcony.

“Man overboard,” she said. “That’s the rescue boat out looking for him.”

I called to Brian, “Man overboard…”

We stood on our balcony watching the rescue boat. We could hear the rescuers calling for the man in the rough seas. Desperate cries in the dead of night.

I texted my family, curious if any of the others were awake. My mom replied first. She could feel the boat shifting and turning, and could smell the smoke from the engines as it strove to turn our massive ship. She was scared. I told her the situation and promised to keep her updated as I heard anything. Sam texted next. “What’s up?”

I filled her in and immediately she asked to meet me in the hallway. Her cabin was just across the hall from ours. She came to me in tears. “What happened to him?”

Since I didn’t know, I had little share. Her heart was heavy and she wanted to find out. She decided to go up to the upper decks and ask around. I asked her to keep us updated.

Within 30 minutes, she had found out and was heartbroken. A YouTube video had already been uploaded and showed the man clinging to the metal bracing for the lifeboat. People were screaming. He was trying to pull himself up when he slipped and fell into the ocean.

Sam asked me to come and be with her. I met her again in the hallway and her tears were flowing. I wrapped my arms around her.

“They didn’t even care, Mom!” As Sam had gone investigating, she’d come up on a group at a bar. Swirling a glass of whiskey, one man said, “Yeah, I heard it. People say he jumped from the top, but he didn’t. Happened down below. Fight, from what I heard. Guy’s a goner.”

Sam sobbed, “How can he be drinking his whiskey and laughing while this man is fighting for his life in the ocean? What if that was his family member out there?”

She was undone. See, we’ve had a family member out there. We loved a soul who was lost to the waves.

We had to help.

We walked down to where he’d fallen. It was roped off, but we could still walk around the rest of the deck. Crew members were stationed there at regular intervals, looking. We searched with them as Sam continued to cry. “Mom, how lonely he must feel out there. He can see the lights of the cruise ship but he can’t get to us. He must be so scared, mom. He must be sooo scared.”

We kept looking. And praying. We ran into another couple. The woman was emotional, but the man was callous. “Guy must have been drunk.” He waved his hand, dismissive. “No way he made it.” I pulled Sam to walk away. Worried she might deck him.

We watched them drop another rescue boat.

Dawn began to break as we kept searching, grateful for the lightening skies. 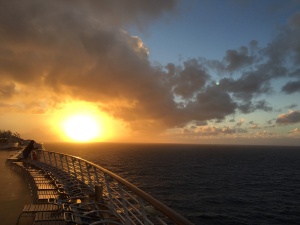 The altercation that led to this man’s passing happened four cabins down from my mother’s room. We went to see her, hugged her and gathered together on her balcony. We could see the blood on the metal frame from her balcony. This was not a distant tragedy. This was right on our doorstep.

The ship circled for seven hours as the rescue boats continued to search the seas. Finally, a coast guard plane in the distance.

With help now there, our ship turned towards it’s original course and began to move. Our man overboard was not rescued on our watch… and late Saturday afternoon the entire search was suspended.

He was lost to the sea.

I heard all kinds of reactions on the boat that day – not many of them kind. An elevator full of people joking about sharks. Others worried we might be late getting to our destination. And when there was speculation that he jumped, words were harsh, callous. Even my own initial reaction – like a curious spectator coming up on the scene of a car accident, was less than truly engaged.

And then my girl.

People wondered if she knew him, so heartfelt were her tears. No, she didn’t know him. But he was a fellow human being out in the sea. Scared. Hurt. Lonely. Lost. And that moved her to pray with everything that she had, cry with abandon and ache for his pain.

The depth of her heart touched and convicted mine. Such love! Such passion! Such beauty!

Early in the morning, while we were still searching, Sam said to me: “Mom, I’ve never prayed for anyone as hard as I have for him.”

In the distance, a rainbow began to appear. The rescue boat was framed in front of it. Later, when we knew that there was little likelihood he would be found, I turned Sam’s face toward mine as the tears came. “Sam, you have no idea what your prayers have done for that man. Because your heart is tender, because you called out, you have no idea what God might have done on his behalf. That rainbow could have been an answer to your prayer in his final moments, showing him he was not alone, comforting him in his fear.”

It’s Monday. I can’t get this story out of my mind. I can’t get Sam’s emotion over his suffering out of my heart. We’ve all become so callous to the pain of others. I know, I get it – we can’t feel everything. Not every situation should break us. But some situations should.

I should let the suffering of those in my world capture my heart and break my heart – and then pray with abandon. And then maybe, like what happened that morning, God will provide a rainbow in someone’s life to say, “I’m here. I am with you. You are not alone.”

This week, my daughter taught me. And so I pray. God, don’t let me be callous to the pain of others. Show me which situations I should pour my heart into, which heartbreak I should let break mine. Don’t let me be the one swirling whiskey in my glass as someone is dying. May I stand in the gap for those that are suffering, drowning in pain, addiction, loss. May my prayers do what Sam’s did – bring a glimpse of your goodness to a hurting life. A rainbow to remind someone of your love, comfort and presence. Let me be moved as you are moved. In Jesus name, amen.