Four years ago, it was tragedy that prompted my Christmas letter. Within two months time, our world was upended. In May my husband gave a kidney to our oldest son Sean, and we fought through the healing/rejection/healing process. Then my dad went sailing one warm July day and never came home. He somehow fell overboard and drowned at sea. Twelve days later my 17-year-old nephew was killed in a car accident.

I wanted people to know. Somehow it made it more real to write it all down – to say to myself and others… this really happened and it nearly broke my heart.

This year has been the complete opposite and I find myself in the same position. I want people to know. Because as horrible as 2009 was, 2013 was one of the best years ever. I mean, ever. Two major miracles happened this year and every time I think of them, my heart fills up with goofy, sappy Christmas joy.

Savannah Grace: She is our first miracle. Ten months old today, Savannah entered our world in the most unexpected, delightful way. After the heartbreak of a failed adoption (when a birth mom changed her mind), we began our pursuit of our Haitian children. Then in February of this year – one week before Savannah was due, we received a phone call – were we still interested in adopting a baby? Our hearts soared and two weeks later, Brian and I stood in the delivery room as Savannah entered the world. Moments later in a memory that will forever be etched in my heart, Brian cut the cord and Savannah Grace was ushered into our waiting arms.

A miracle. A delight. The best gift ever.

We have enjoyed every moment with Savannah since. The nighttime feedings, the drool, bath times, first smiles and today the wobbling stance as she grips the table and tries to stand. 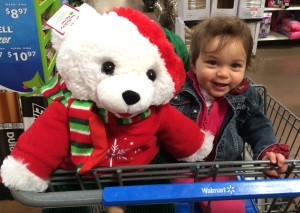 Savannah and her Christmas bear

Then another miracle. For nearly nine years, my husband and his daughters have been estranged. I had never met them, although we literally prayed for them every single day. Over the years Brian faithfully reached out. He so longed for relationship with them and refused to give up.

One day he received a text message. “It’s time to bury the hatchet,” said one of his girls.

Not too long after, Brian had a business trip to Ohio and invited the girls to dinner. They said yes. All of us here in Colorado prayed that whole day. Brian met them at a nice Italian place and as the hours passed, we anxiously awaited word. Did it go well? Were they able to enjoy one another, talk, laugh?

Four hours later, Brian called. He’d spent all four hours with the girls, lingering over a meal. Conversation and laughter flowed easily. “It was as if we’d never been apart,” he said.

Over Thanksgiving I had the chance to meet my step-daughters for the first time. They were beautiful, smart, gracious and kind. They met their sister Savannah and one day soon will get to meet Samantha.It all felt so right and good, so natural – better than any of us could have hoped for or dreamed of… 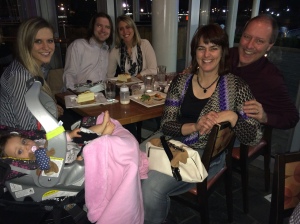 I don’t want to forget this, this overflowing joy of answered prayer. Life is hard. Painful. Broken. And I know so many of you come into this Christmas season carrying grief that nearly bends you double. I get it. We still carry the loss of Dad and Caleb in our hearts – even more so as we wish they could have met Savannah, Jessica and Cassie. But for some of you the pain is fresh and deep. After this last year I just want you to know, I want everyone to know – that there will be good days ahead. That God hears and answers prayer, that there is light (huge, bright and beautiful) still ahead.

Sometimes  I wonder – what will 2014 bring? Will we get to bring Wilna, Lovence and Laurentz home from Haiti? Will our hearts break with new tragedies? Or will there be some other unexpected bundle(s) of joy on our doorstep.

But whatever comes, I am so very grateful for our God. He is the one who gives good gifts and yet still holds us when the heartbreak comes.

It may sound like just the type of thing I would say for Christmas, but it’s so stinkin’ true. In God’s arms I am safe no matter what comes and so are you. That is the very best gift we could ever receive.

And Merry Christmas my friends…

15 thoughts on “From Tragedy to the Best Stuff Ever”